FAQ: The Difference Between Trunnions and Dummy Legs

We’re here to help you sort out the answer. In this article, we discuss the ins and outs of these pipe supports and point to the subtle differences between trunnions and dummy legs.

What Is a Trunnion?

A trunnion is a piece of pipe that you weld to vertical piping in order to add support. They’re usually welded to those areas of the piping system that need a higher load-bearing capacity.

Why Use a Trunnion?

Without support, vertical piping can lose stability. Anyone who has tried balancing a long pole in the palm of their hand understands how gravity can destabilize an object. With gravity pulling down, the pipe flexes or wobbles, which endangers piping. It also can put extra pressure on those pipe supports that are trying to pick up the slack. The trunnion helps by adding stability and securing the pipe.

What Is a Dummy Leg? 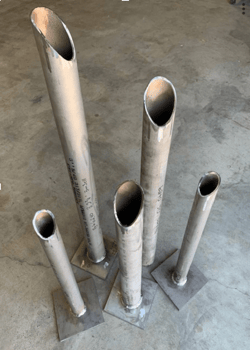 A dummy leg is a piece of pipe that acts as a support branch between your pipe and a nearby support point. It is generally either smaller than or the same size as the pipe you’re supporting. By welding these extra pieces to your pipe run’s elbow, you essentially add a support wedge that fortifies a vulnerable point in your pipe system.

Why Use a Dummy Leg?

The most common way to use a dummy leg is to add support at unprotected elbows. Sometimes your pipe runs will end up with elbows that extend past their supports. It can be dangerous to have elbow joints sticking out and hovering because these areas are also where liquids are forced to switch directions—making them high pressure points.

By welding a dummy leg to the back of your pipe elbow, you add a support point that helps absorb pressure and fight gravity that otherwise may pull your pipe joint apart.

What’s the Difference Between a Dummy Leg and Trunnion?

So what’s the difference between a dummy leg and a trunnion? These two terms are commonly mentioned in the same breath, but don’t be fooled. There are a few differences between these two pipe supports:

Trunnions usually take the form of two pieces of pipe that you weld to a vertical run. For instance, if you have vertical piping that you need to secure, you can weld trunnions to the sides of your vertical pipe. That way, your pipe isn’t flexing or wobbling in a way that puts it in danger of wear or ruptures.

By contrast, a dummy support consists of a full piece of pipe that you weld to the back of an elbow. It props up your elbow and forms a bridge between the point where your pipe run changes direction and your closest support.

When to Use a Dummy Leg or Trunnion

Dummy legs and trunnions are both great options if you want to add structural integrity to your piping system. Here are a few more detailed instances when you may use a dummy leg or trunnion:

When engineers conduct weight analysis and pipe stress analysis on a system, they may spot areas where loads aren’t properly supported. Unaddressed, these vulnerable spots can lead to ruptures, broken pipe supports, or pipe failure. Dummy legs and trunnions add structural integrity to these runs.

Your piping system includes high pressure points, especially at elbows or joints. When liquids rush through these points, they slam into a concentrated spot. Adding extra support through a dummy leg or trunnion transfers stress off that joint and onto the pipe support.

If a section of pipe overruns its supports and is hanging over a ledge, it has to face gravity and pressure buildups. These awkward runs need extra support to avoid damage. Trunnions and dummy legs add a physical scaffolding to account for runs that are missing structure.

By adding the right pipe supports to your system, you can protect against failures, avoid damage, reduce long-term costs, and increase performance. And when it comes to pipe supports, there may be more options than you realize. Want to learn what pipe restraints are designed to improve your pipe system? Read our Complete Guide to Pipe Restraints to learn the ins and outs of these critical pipe supports.