The Anatomy of a Pipe Saddle 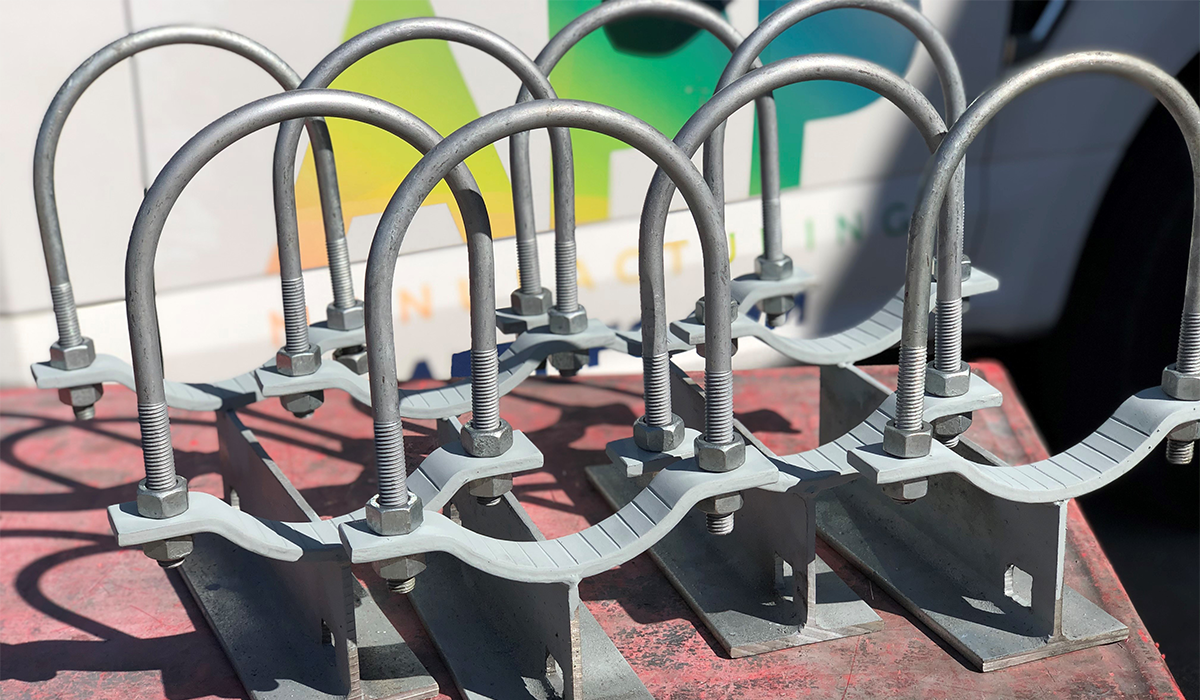 With massive weight, rushing liquids, and corrosive elements bearing down on your pipes, it pays to give them support. Installing pipe saddles is a simple way to transfer the pipe’s load weight onto a supporting base.

Still, there may be more to these structural pipe supports than you realize. Throughout the years, the pipe saddle has evolved from a simple way to transfer weight to a versatile marvel.

Wondering how these pipe supports have morphed into advanced pipe savers? In this guide, we dig into the nitty-gritty of pipe saddles and examine how they are now designed to support a range of functions.

What Is a Pipe Saddle?

A pipe saddle is any pipe support that cradles a pipe and transfers the pipe’s load weight onto a supporting base. Much like a saddle on a horse supports a rider and keeps them from bouncing on the animal, pipe saddles support a pipe’s weight. In process piping systems, a pipe saddle has two distinct features:

How Has the Pipe Saddle Evolved?

In the process piping world, “pipe saddle” refers more often to a product’s basic shape than to specific pipe supports. That basic structure—a saddle support with an integral base—has become the jumping-off point for even more advanced piping products. For instance, APP’s T-Style Pipe Shoe includes a pipe saddle, which supports and elevates the pipe, along with a bolt to hold the pipe in place.

Essentially, these supports take the original pipe saddle design and add additional support features to secure pipes. These pipe shoes include a pipe saddle, but they also feature bolts or clamps to control pipe movement.

How Can Pipe Saddles Strengthen Your Pipes?

Pipe saddles, and the products they’ve inspired, can keep your piping system strong longer and thus save you on long-term costs. Here are a few of the common ways pipe saddles protect your pipes:

Why Elevate Pipes with Pipe Saddles?

There may be more reasons to elevate your pipes than you realize. Here are a few of the biggest advantages you gain by elevating your pipes with supports that feature pipe saddles:

When pipes rest on bare ground or grimy surfaces, they are susceptible to corrosion. Microbes and moisture provide a route for corrosion to start eating away your pipe’s metal. That’s why simply raising pipes off of pooling liquids or dirty surfaces can help prevent some forms of corrosion.

Elevating pipes also can separate pipes from dissimilar metals that might cause galvanic corrosion. For instance, if you have carbon steel pipes that are resting on stainless beams, your stainless surfaces could steal electrons from your pipes. In turn, your pipe can rust, weaken, and collapse. Some saddle-based products, such as APP’s T-style shoes, can be fitted with a nonmetallic liner to eliminate metal-to-metal contact and fight off corrosion.

When your pipes lie on beams or other metallic surfaces unprotected, they can be exposed to metal-to-metal wear. That’s because when pipes shift or vibrate, the surface of the pipe digs into the supporting structure.

First, this friction can tear open the surface of your pipes and cause ruptures. Second, it can create small abrasions on the exterior of your pipes. Those little holes can harbor bacteria and cause crevice corrosion.

Products that include pipe saddles lift pipes off these harsh surfaces and give you more control over the pipe’s movement. That way, when pipes move, they glide along the surface you choose in a more controlled motion.

Another way the pipe saddle design improves your piping system is by adding a layer of stability. Even if pipes seem relatively stable, they’re susceptible to movement. When vibrations run through pipes, liquids slosh around, or pipes shift from thermal expansion, it can damage the pipe’s surface.

Worse yet, pipes can end up crashing into surrounding objects and rupturing. Pipe supports that include pipe saddles harness the pipe and keep it from wobbling—protecting your pipes from slamming into hard surfaces.

Why Use a Pipe Saddle as an Anchor Support?

Remember when we mentioned that pipe saddles work much like a saddle on a horse? Now imagine you’re riding a horse without a saddle on a bumpy gravel road, and you weigh thousands of pounds. That image touches on the problems saddles can solve in the piping world when they’re used as anchors.

Your pipes are heavy, and any movement could destroy pipe surfaces. Pipe saddles can cushion the force of that movement, lift pipes up, and secure pipe runs.

Wondering how to turn a pipe saddle into an anchor support?

An effective way is to add a bolt or clamp to restrict vertical pipe movement. An example of this type of anchor is the APP heavy-duty, U-bolt-on T-style pipe shoe. This pipe support is made up of a pipe saddle with added gussets and multiple U-bolts to hold the pipe in place.

Why Use a Pipe Saddle as an Adjustable Support?

When a disaster strikes your piping system and pipeline failures happen, you may need to make adjustments fast. If that means slicing into existing structures, it could cost you precious time in a crucial moment or piles of money in the long run. When you use pipe saddles as adjustable supports, you can make changes to your piping without doing permanent damage to your broader piping system.

Especially if your pipes are exposed to the elements, you know how a storm or inclement weather can hit your system quickly. Adjustable pipe saddles let you change the format of pipes to keep them out of harm's way when the environment around them turns.

If you want to prevent corrosion, it is important to clean and maintain pipes regularly. Adjustable pipe saddles make that whole process easy. They give you access to crevices and the underside of pipes, so you can spot early symptoms of corrosion and fight off pipe corrosion before it spreads throughout your pipes.

It’s not uncommon for changes to pop up during a job, and sometimes errors happen during installation. Adjustable pipe supports give you the flexibility to adjust the layout of runs or add on to your existing structures without being hit with major expenses.

Answers to All of Your Questions About Pipe Shoes

APP’s T-style pipe shoes are an excellent example of a pipe saddle that’s morphed into an advanced pipe saver. However, these pipe supports just scratch the surface of what’s available when it comes to piping solutions.

Want to learn which pipe shoes will save you the most time and money in the long run? Read our Complete Guide to Pipe Shoes and uncover everything you need to know about elevating and strengthening your pipes.